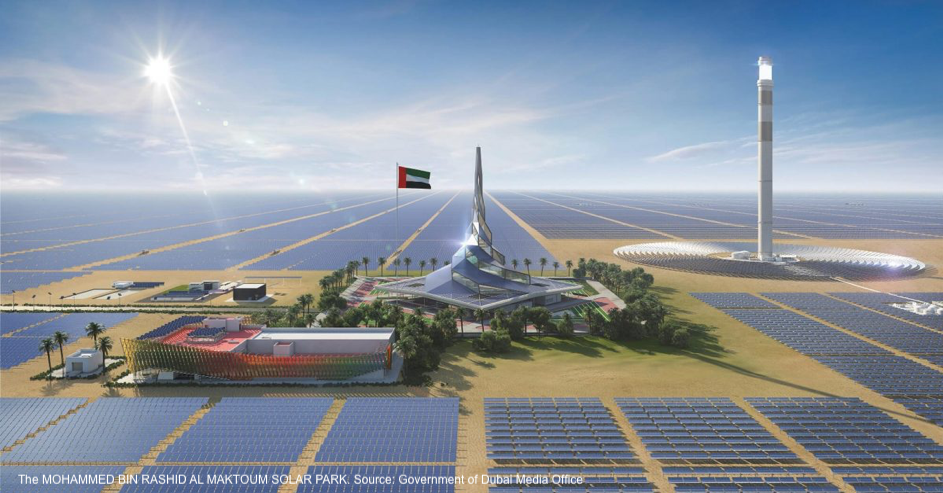 In 2017 the United Arab Emirates (UAE) launched the “Energy Strategy 2050” with the ambitious goal of reaching an energy mix of 44% clean energy, 38% natural gas, 12% coal and 6% nuclear by 2050. All backed up with a huge financial investment of approximately $150 billion. The key reason behind this: investing in renewable energy is economically attractive as it creates more jobs and is cheaper than power produced from fossil fuels. At the International Conference on Advances in Energy Systems and Environmental Engineering (ASEE), ETEKINA met the Head of the Sustainable and Renewable Energy Engineering Department at the University of Sharjah in the UAE, Prof. Abdul Ghani Olabi to talk about the bright future of renewable energy there.

The image of the UAE being totally bent on petrol is still widespread. But it would seem this is not quite correct. What is driving this shift?

Do these investments aim to scale up photovoltaic installations or are they more focused on qualitative research like developing more efficient technologies?

Olabi: Actually, it’s both. The United Arab Emirates are investing to expand solar energy, meaning more PV panels to be installed. However, they want to reduce cost, which is already lower than traditional power. At the moment, the price stands at 2.2 – 2.3 cents per kilowatt/hour.

This is an excellent and very competitive price. At the same time, the United Arab Emirates are building up research, investigation and development in this area – not only on solar, PV and thermal but also on marine and wind energy with the help of huge research centres. The Masdar Institute, for example, is one of the biggest institutes in the world. It was established in collaboration with the M.I.T. and mainly looks at renewable energy research and investigation. The University of Sharjah is the only department in the area that offers a degree in sustainable and renewable energy engineering. All this shows how the UAE is working on getting more and more power from renewables. 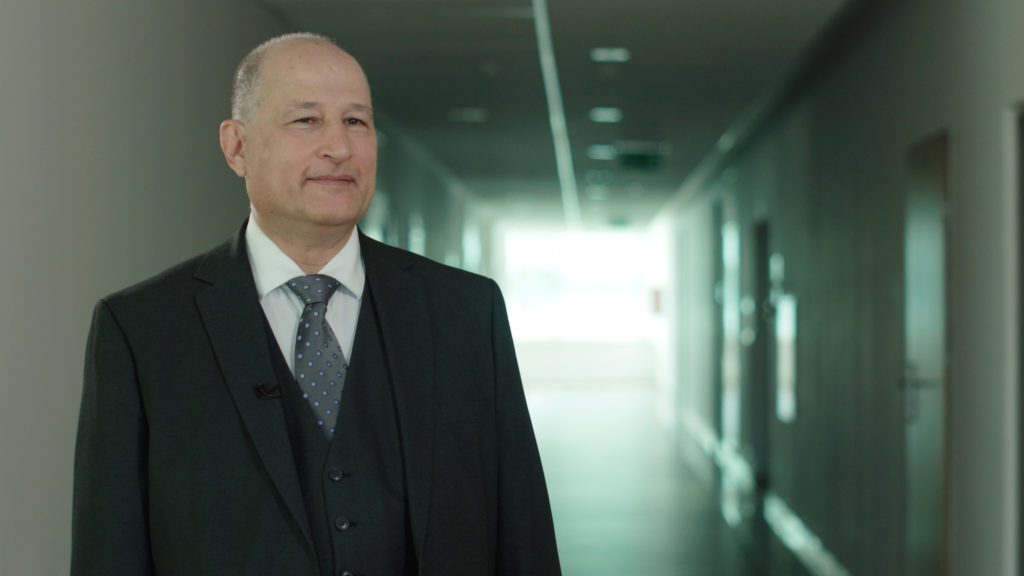 Before getting back to your home country you started your professional career in Northern Europe. For almost 20 years you have been working in Ireland and Scotland – what do you think we Europeans could learn from the current energy shift in the UAE?

Olabi: Actually, it’s really a government decision. When we go back to Europe, Denmark and Sweden are the top countries in producing and using renewable energy because there was a political will to promote renewable energy and invest in it. That happened in the 1980s in Denmark. They have big revenue from renewable energy. They export wind turbines and a lot of technology because they are the leaders in this area.

In the last 10 years the UAE has expanded its renewable energy portfolio by more than 400% and wants to double it in the upcoming decade. Does this then all depend on a political decision?

Olabi: In my opinion, yes, because investments in the end should come from the government. You can get private companies to invest, but a grid, electricity support etc. is a government´s decision. Sweden has maybe two or three times more energy from renewables compared to other countries with probably more land. This means that the Swedish government decided to invest in renewable energy like the Danish government did. Governments need to get some incentive to support this growth of renewable energy. The United Arab Emirates are supporting a lot of companies and institutes in growing, to establish clean and renewable energy. Like the solar park for example. Of course, it involves money, but Europe is also rich. So, a political decision is necessary in my opinion.

Looking at the political agenda – the UAE seems to focus on a long-term strategy, a kind of business strategy. While in Europe we are more afraid of climate change and that is maybe now pushing things forward.

Olabi: There isn’t so much difference – The UAE also wants to fight against climate change. There are many conferences about climate change. Another reason for shifting towards green energy and its benefits is the fact that petrol resources will run out one day.

That´s why we are investing in this area and also supporting universities in offering degrees in renewable energy. If you decide to build a solar park making five mega or gigawatt or more, then you will need to have the necessary personnel on hand! You need engineers, you need people specialized in the installations, maintenance as well as people to supervise the works. At this point we look at our students and we can find them in such projects – whether it is a solar park or a project developing aeroplanes working with solar energy or at the Masdar Institute and Masdar City. Our students are directly involved in such projects. So, it´s really essential to do both: prepare the people and invest. Furthermore, you need to establish the culture, so that people understand why it is important to work on renewable energy. Students want to be sure they’re doing a worthwhile degree with a job at the end; something they enjoy and really believe in. This is also a principle – and this culture is growing here, in Europe and everywhere. But there also needs to be huge investments.

Is there a special example we should highlight from all the current renewable energy projects in the UAE?

Olabi: I think you should look at the solar park near Dubai which is supported by the Dubai government. It’s a huge, ongoing project. Being one day the biggest solar park on earth, they are going to produce electricity covering 800,000 houses. That means this solar park will provide electricity for the whole population of Dubai – about 3.5 million people! This is really a huge project in every way.

The Gulf area enjoys a lot of sunlight and this natural source of energy is a critical resource for the UAE. But, critics may say that’s good during the day, but what happens at night?

Olabi: Actually, this is an issue with all electricity from renewables. Scotland may get wind during the night but not so much during the day. We get solar energy during the day, but we don’t get it during the night. This leads us to energy storage systems, something we’re covering at the University of Sharjah. We have the university supporting a group of researchers in working on energy storage systems. I am leading this group, and our target is to get whatever technology we can develop and improve a number of technologies related to energy storage systems. This is really the future, for us as researchers, for the university, and also for the industry. Besides storing this energy, we need to find solutions for increasing the efficiency and using the renewable energy in different applications: for example, having a fish farm to produce micro algae and having a greenhouse to get vegetables and fruits with the help of this renewable energy. So, we use this renewable energy to heat or cool a place. But energy storage systems are still the number one priority for us.

Is there a new key technology for developing better energy storage systems?

Olabi: No, currently, it’s really batteries and improving battery technology. This technology is growing as there are new developments in materials which are improving the efficiency capacity of the battery. But in my opinion, we also need to look at hydrogen energy, like using the renewable energy to convert water to hydrogen, oxygen. We have to store the hydrogen and use it again as electricity, or directly as hydrogen. We can have cars running on hydrogen. We can use hydrogen in different ways: we can mix it with other materials to get other products which will help us in our world. A lot of car companies are switching to building hydrogen-fuelled cars, and I think the greatest aspect with it is: it’s clean! There is no problem of recycling, like we have in batteries.

But there are also other energy storage systems such as flywheel, hydro and compressed air. At the University of Sharjah we are working on a project with compressed air. We convert the surplus energy to compress air and later we use this air to generate electricity. So, there is a huge research effort in this area. We can also use hydropower to take water to reservoir located at high position and use it again later to generate electricity. Many sources and solutions are being explored. Some of them can be used already, but we need to improve the efficiency of all these processes.

In addition to the country’s own renewable energy goals, the UAE is also providing funding for renewable energy projects all around the world. You are also taking part in many international conferences and meetings. Do you think we all have to work together to build up a world based on efficient and thriving renewable energy systems?

When do you think we will be 100% reliable on renewable energy?

Olabi: The United Arab Emirates is aiming for 2050. I know a lot of places in Europe which are already at 100 percent. I know some towns in Denmark have already implemented the policy of one hundred percent renewables. They are getting renewable energy for their cars, heating, electricity, and for everything. But it’s small in scope. I hope this will grow and cover all of Europe, and finally the whole world. This is what will eventually save our planet. So, we really need to be one hundred percent renewable.

Is there anything you want to add?

Olabi: Actually, I appreciate media work about renewables because communication is important. We also need to disseminate our work to the community. In the end community understanding is very important. For example, when we talk about bioenergy, sometimes you get resistance from the community: Why bioenergy? We don’t like the smell. So, we resist. But, if they understand that these technologies are improving, that there is no more smell nuisance, then you can start establishing bioenergy because it will help you instead of just throwing organic waste away.

But also, for other ecological things like wind or solar energy it is very important to encourage the population, the community. So, media work is essential when we are aiming 100 percent renewable energy!