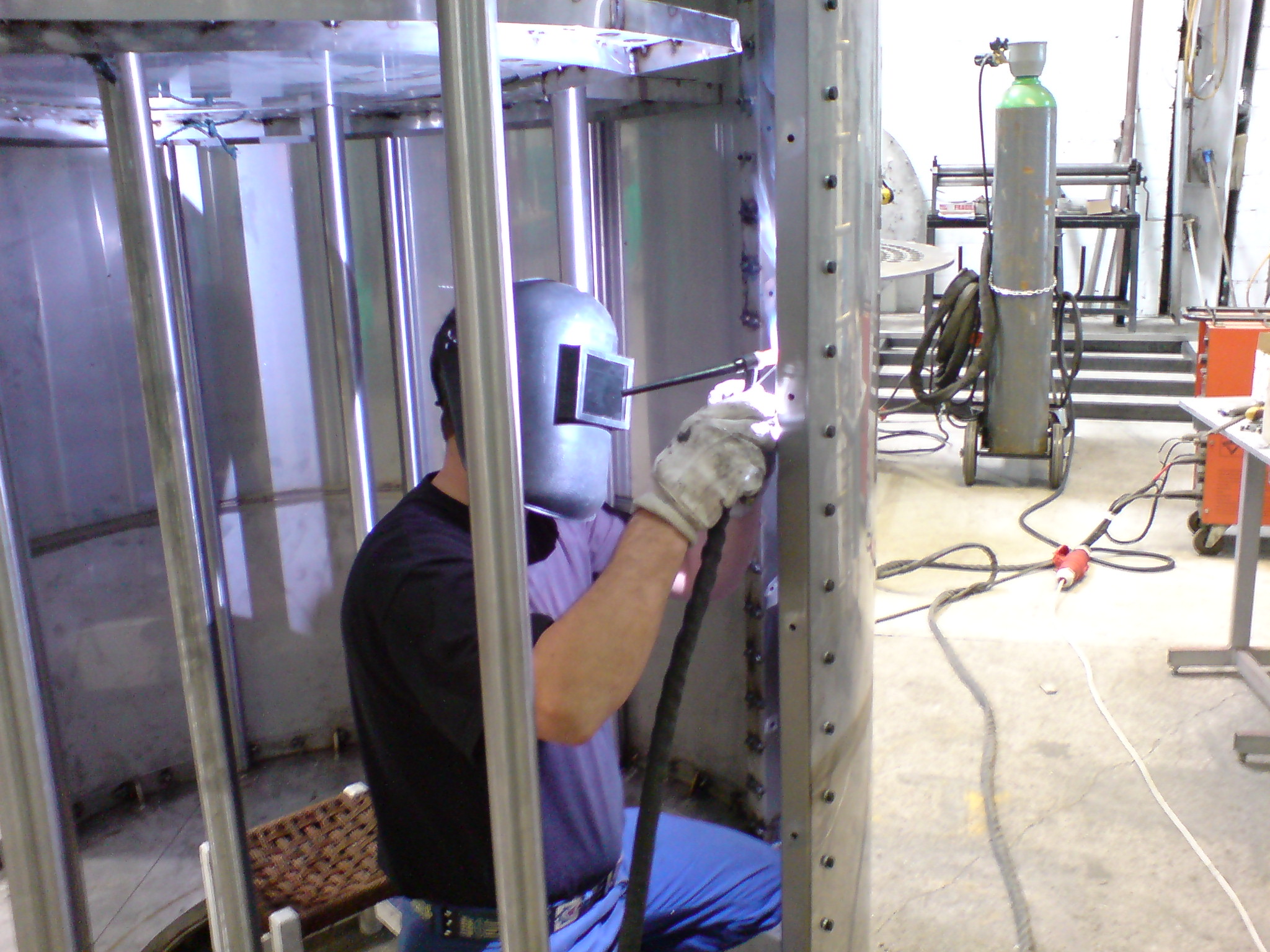 Mark Boocock is the managing director of ECONOTHERM, a company that designs and manufactures heat pipes in innovative ways for industrial heat recovery. Within the ETEKINA project, ECONOTHERM is manufacturing newly designed heat pipe systems. As the coronavirus pandemic unfolds, Boocock explains to ESCI what the impacts and likely fall-out for the heat pipe industry will be.

So we are talking to you right after the UK has gone into coronavirus lockdown. How are the measures affecting ECONOTHERM so far?

Boocock: We’re quite fortunate in some respects in that we don’t rely on people coming through the door to pay us. We’re normally working on longer-term contracts, mostly with blue chip clients, and they’re all still pushing ahead and want the equipment that we are making for them. They’re giving us some relaxation on deadline as of course you’d expect.

On the new business side in fact we’re still receiving new letters of enquiries, even surprisingly from Italy, we’re being chased from there at the moment. And China is pretty much back to normal so they’re pushing. We’ve got contracts in Taiwan, we’ve got the European Commission and the USA, so we’re pretty active. But I wake up every morning wondering where this is all going, and I’m sure I’m not alone.

You’re in the office today though, right? And the factory is still running?

Boocock: From a leadership point of view, I don’t expect people to open the factory if there’s no management here. It seems like abandonment. Of course if the government decides that it wants to close all factories, then we will grind to a halt.

In terms of the factory, we are observing the government guidelines where if anybody exhibits any symptoms they are going into quarantine for 14 days. At the moment the factory workforce is probably about 30, today we’ve got eight people missing, we’ve got four people in quarantine, we’ve got another four people at home because since they closed the schools, the whole childcare thing is becoming an issue. Whereas they would normally put the kids with the grandchildren, they’re not allowed to do that of course, so it’s slowed us down, but it hasn’t stopped us yet.

The heat pipe market was previously predicted to hit US$ 30 billion by 2026. Do you think that COVID_19 will affect that projection?

Boocock: It might not surprise you to learn that I haven’t done a full analysis of what the impact on global economies of the coronavirus is! I don’t think anyone knows. If you talk to investment analysts, they are all pinning their hopes on the fact that this is a 3-4 week problem and then we’re all back to normal. I very much doubt that that’s going to be the case and it really depends on how things go going forwards, but I think it’s quite reasonable to expect that if the world collectively deals with this and develops a vaccine then we can expect things to get back to normal at some point but I do not think we’re all going to be back where we were. I think that there’s going to be some long-term fall-out from this.

This will slow things down quite badly, you can expect that 2020 is going to be a challenge for many but so far we are looking Ok. If we can get some semblance in 2021, of where we are, then that’s probably the best we can hope for. If however, we see another wave of this come through – if China got hit by a second wave of this, with a slightly different variant, I think we’d all be sitting here thinking oh my god, is this the end of days? We’re dealing with events here that are so apocalyptic, it’s hard to consider what will happen going forward. If this continues into May, we’re likely to see 90% of the world’s airlines go bust. That’s just something which was beyond comprehension six months ago.

Before the coronavirus outbreak, eco-friendly technology had enjoyed a strategically important political position in Europe. For example, the European Green Deal, which was announced in December 2019, promises significant investment in green technologies in years to come. Could you outline how heat pipe heat exchanger technology fits in with the Green Deal objectives?

Boocock: The Paris Accord has set emissions targets for high energy consumption businesses. Such policies have already driven the adoption of our equipment. If you’re a large energy consumer such as a business, you will have had your emissions baselined some years ago, and you will have centred reduction targets. This all plays into the carbon trading market, in that a business which doesn’t achieve its targets on CO2 reduction has to go and purchase its CO2 credits from the market, which comes as a cost, so it’s a penalty. If you exceed your reduction target, then potentially you have carbon credits you can sell on the market.

And ECONOTHERM’s heat pipe heat exchangers can reduce a company’s CO2 footprint and make them more competitive on the carbon trading market?

Boocock: When all this started and large companies first had to reduce emissions, they began with the really easy things, like changing the lightbulbs, automatic switching, vehicle fleets, changes to the windows, blinds, all that sort of thing. But the thing is that once you’ve done all that, you still have these continually reducing targets. Many companies are emitting waste heat, and they’ve been able to ignore that for a certain amount of time, but it’s got to the point where in order to keep achieving the targets, they have to start looking at these more difficult areas, which are the ones we got involved in. In cases where waste heat has been very difficult to recover, heat pipes emerge as a low-risk way of doing so. And hence, things that had been avoided up until now are now being adopted.

Heat pipes are quite an old technology – they’ve been around for a while. So why now, why have they suddenly become interesting for industry to capture waste heat?

Boocock: Heat pipes have been around a long time, but they have been most widely used in exotic applications where the cost of the heat pipe itself hasn’t been that much of a consideration. Every satellite orbiting the Earth is full of heat pipes, but when you’re manufacturing a heat pipe for a satellite, you don’t care so much about how much it costs. The budget for building a satellite is very different from the budget for delivering an industrial heat exchanger!

So has the price for heat pipes gone down in recent times then?

Boocock: The intellectual property of ECONOTHERM, the process and the know-how we have for manufacturing heat pipes is low-cost and very effective. And what we have is completely propriety, we don’t manufacture heat pipes in any kind of conventional manner. It’s a process which lends itself to low-cost heat pipes and therefore we have enabled the widespread adoption of heat pipes which would otherwise be too prohibitively expensive for industry to be adopted in industry. That’s one of the major achievements.

Could you give me some examples where ECONOTHERM’s heat pipe heat exchanger technology has been used?

Boocock: We’ve had great success in developments for our niche products, for example, for the silicon industry we developed a roofing material which is part of another EU project called PV Adapt which involves thermally active building materials that can be used in roofs. We’ve also developed a thermally active refrigeration shelf to be used in supermarket display cabinets which saves 30% of energy.

Behind the scenes, our technology is helping to reduce the emissions that are involved in the process of actually manufacturing silicon wafers, which are the material that goes into the solar panels. We work with the manufacturers that manufacture the silicon wafers that go into solar panels. Obviously while the solar panels provide a fantastic source of clean energy directly from the sun, there is a process to manufacture those, and we get to a solution which enables them to reduce emissions in the making of the panels.

I always say in this business, there are things we are doing today that we didn’t know about 12 months ago and there will be things that we do 12 months from now that we don’t know about today. That’s the simple reality of working with heat pipes. It lends itself to many clean energy applications. Some have been adopted, some of them are still in development and there are some that haven’t been thought about yet.