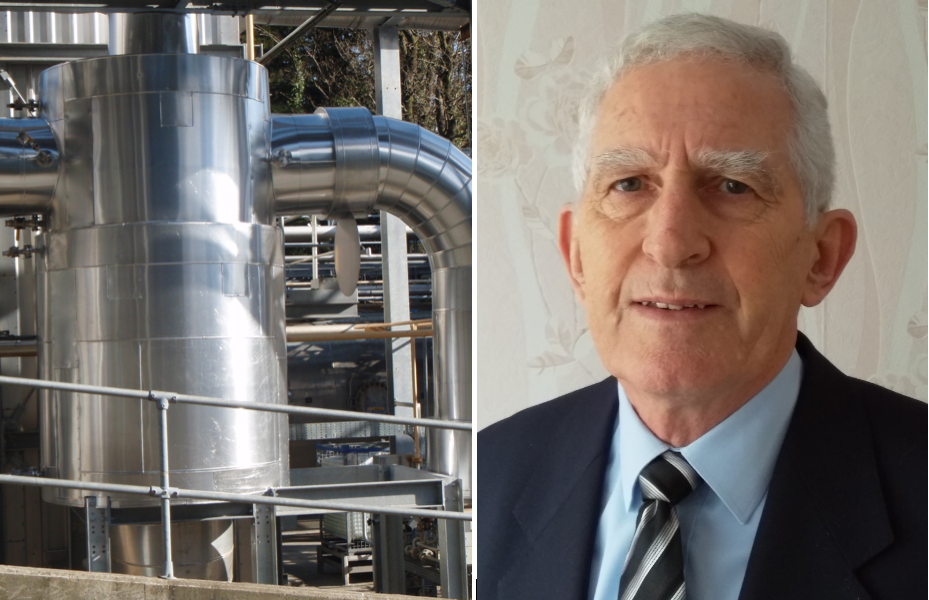 Brian Axcell, professor at the Institute of Energy Futures at Brunel University and expert advisor on the EU-funded ETEKINA project, speaks with ESCI about his career to date and the potential of heatpipes.

How did you get involved with ETEKINA?

Axcell: About two years ago, I was invited by Prof. Sam Jouhara from Brunel University. The problems he was tackling were quite interesting. And many of these topics had quite a rapid payback. They were topics and problems which needed solving, but where there would be some benefit to someone in a relatively short time. Some of my career I was working on topics – reactor topics and so on, where the benefit might or might not come twenty years later or whatever, so it’s quite refreshing to be working on problems with an immediate industrial relevance. That’s where I am at the moment, still working on heat transfer fluid flow topics, now within the ETEKINA project.

What are the advantages of heat pipe heat exchangers?

Axcell: They’re more energy efficient and also they’re safer, rather than having tubes with flows going through where a single tube failure will create problems.

Heat pipes are sealed units, linking the primary flow and the secondary flow. If a heat pipe were to fail it would be one of a large number. And it wouldn’t require a very large fluid content to contaminate the primary flow. This redundancy in the number of tubes is really quite an attractive thing. There’s a much better chance of large-scale energy recovery, they don’t take as much energy to operate, and if we can recover energy then it means less overall energy usage and less greenhouse gases.

What research discovery have you made that you’re most proud of?

Axcell: This is going back a long time! When I was working in the Risley Nuclear Laboratories for the Atomic Energy Authority, at that time the prototype fast reactor was operating at Dounreay, which is on the north coast of Scotland. There were some unexpected temperatures on the reactor. At that time I was a relatively junior engineer, but I did manage to identify the reasons for these unexpected temperature distributions. I was able to do some fairly simple analysis to demonstrate what was happening and then also I did a model experiment to demonstrate that my understanding of what was happening was actually the case. That was something where I was to a certain extent on my own in pushing this understanding of what was happening amongst a larger group. I was rather pleased about that.

I identified physically what must have been happening, but I found it difficult to persuade people, even though I could do the calculations! That’s going back forty odd years, there have been many other interesting research topics, but that’s something that I was very proud of.

Any other interesting achievements?

Axcell: I had gone out to do work at the Research Centre Karlsruhe (FzK) for periods of several weeks, working with colleagues to do research at this institute which is really one of the top research institutes in Germany in the energy field. Then in 1996 I spent a whole year there on sabbatical leave. While I was out there I was working partly on the European Pressurised Water Reactor, but also making measurements in sodium jets, which was quite an interesting thing to do. And also, that enabled me to improve my German. Since then, some of my work has been doing technical translations. Ten or so years ago, I and some colleagues at Manchester University published a book about the early developments in modern aerodynamics. It turned out that a lot of the pioneering work on things like lift and drag on aerofoils, had never been translated into English, it was still in German or Russian. People referred to the pioneering papers and they’d never actually read them because they’re not in English! We thought it would be good to write a book drawing together all of this pioneering work in the first twenty years or so of the 20th century. So that was quite interesting doing these technical translations.

What do you think are the most exciting applications of heat pipe technologies?

Axcell: For example, in supermarkets there are always certain shelves that are chilled. Not the refrigerated units, but the actual chilled shelves. Traditionally it’s been done by blasting cold air at the shelves and the products on them, which has the effect of making that area in the supermarket really quite cold. Now it’s possible to cool these shelves directly by heat pipes. The design has been done by Professor Jouhara and a patent has been obtained.

It’s been known for some time that you can deal with domestic waste using the process of pyrolysis, where the waste is heated in an oxygen-free environment, and the organic material breaks down into oils or char, essentially carbon. But it’s quite difficult to get uniform temperatures in the waste. Now if you have heat pipes, operating at 300 degrees C or thereabouts in the waste, then that can be used to create uniform temperature conditions to get that process to occur. Then the oils and so on can be drained off and used for other things or burned to produce energy. And in fact one of the patents at Brunel is for something that’s on a domestic scale where each house could deal with its own waste and convert it to substances that could be used for energy and also reduce the volumes of waste enormously. That’s quite an interesting topic, too.

What do you think that the future looks like for heat pipe heat exchangers?

Axcell: I think it’s good, I think there are going to be many more applications. Heat pipe heat exchangers in some regards are easier to manufacture than traditional heat exchangers.

Always nice to see your own biography published. This is mine. ⤵️